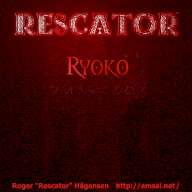 This is what happens when you love the past as much as the future as far as music is concerned! It's like a soundtrack, sci-fi/space fantasy, electronic, orchestral, industrial, etc. Yet it's a soundtrack without a movie, maybe one day I'll get to make the movie as well!
The music was composed on my old Amiga 1200 computer, a mix of 8bit and 16bit sounds was used. The tracks was composed using OctaMed Soundstudio, a old but very good Module Tracker.
That was back in 1997-1999, now 2010 I re-generated the tracks in 16bit 48KHz, processed them as 32bit 48KHz, cleaned up clicks and pops, raised the lower end a little, added some warmth, normalized to -20dBFS(RMS), and turned them into 24Bit 48KHz FLAC with no dithering.
So you will be hearing "computer" sound in all it's glory (and flaws)!
And how did I come up with the music? Well... I didn't. The music came to me. (yeah a cliche, I know) I normally start with a sound or note, hit keys on random and now and again that key leads to the next.
Sometimes the song morphs into something completely different throughout a song. What it may appear to be at the start, may not always be the end!
But most importantly, I had fun. And now and again I get nostalgic and
listen to my old tracks. And now on this album you can hear a few of them.
The bonus track was created a bit later than the rest, but it too was made on the Amiga... Enjoy!
Roger "Rescator" Hågensen
http://Skuldwyrm.no/